from tree to bar

Grenada Chocolate Fest is an annual week-long festival that takes place in May on the Caribbean Island of Grenada. Grenada is home to five chocolate factories including the world-famous Grenada Chocolate Company founded by the god-fathers of modern tree-to-bar chocolate Mott Green and Edmund Brown. Learning cocoa farming, chocolate making, experiencing local food, drinks and entertainment take place all over the island with the intention of celebrating Grenada’s ethical tree-to-bar chocolate.

Grenada Chocolate Fest was founded in 2014 by Magdalena Fielden.
Of Mexican origin and inspired by the Tree to Bar Grenada story, Magdalena is now a passionate cocoa-chocolate lover and educator. She came to Grenada with her husband and two daughters in 1998, together they own and manage the “Boutique Chic, Climate Smart” and sustainability award-winning True Blue Bay Boutique Resort.

In 1999 the Grenada Chocolate Company was founded by Mott Green and partners, he is considered nowadays a pioneer of modern tree-to-bar chocolate. He founded the first-ever fine chocolate factory at the farm where the cocoa grows, after hundreds of years of exporting Grenada Fine Cocoa to traditional chocolate-making countries in Europe and North America. The Grenada Chocolate Company is the first of several chocolate factories that now exist on the island and grow organic cocoa to make ethical tree-to-bar chocolate.

On Christmas 2013 Magdalena invited Mott to talk to the hotel guests about the extraordinary story of how he started making the first “Tree to Bar” fine chocolate bar in the tropics. Mott mentioned to Magdalena that he was never being invited to share his story with tourist before. After the success of the talk and enthusiasm shown by the attending guests, they agree to create an event showcasing the local cocoa and chocolate. Sadly, Mott died later that year and in honour of his extraordinary story, Magdalena decided to go ahead and create a unique event, involving the local farmers, cocoa producers and chocolatiers, to help carry on his legacy and try to keep the Grenada chocolate industry alive.

Mott was a true visionary of sustainability from the moment he started to plan the factory. He inspired farmers to become organic, created the first organic cocoa association, paid a better price to the farmers for their cocoa, ran the factory mostly with solar energy, upcycles old chocolate machinery adapting it to the Grenada environment, only use organic ingredients for the chocolate and try his best to distribute his chocolate around the world by carbon-free means (sailboats and bicycles).
The first year of the festival was in August 2014.

The Effects of the Festivals Success

The Grenada Chocolate Fest celebrates all thing cocoa from the tree-to-bar chocolate making process to local and sustainable cocoa inspired products. Through the Festival’s carefully curated schedule of events, festival goers will be taken around the stunning tropical island, into the cocoa fields and behind the scenes of sustainable run cottage style chocolate factories and small scale modern factories.

Since the festival started in 2014 the number of chocolate factories in Grenada has risen from two to five! Grenada now participates in a few international chocolate trade shows and promotes chocolate at all their international tourism endeavors. The local crafter on the island have taken an interest in cocoa inspired products and thus we have seen an increase in cocoa paintings, sculptures, fashion and new products such as whipped cocoa butter, cocoa sauces, and creative chocolate treats all of which you can find at the Grenada House of Chocolate Mini Museum that was also inspired by the Festival and continues year around promoting and educating tourist and locals about fine Tree to Bar ethically produce chocolate and cocoa farming.

Since its inception in 2014 the Grenada Chocolate Fest has witnessed and has been part of the blossoming of the cocoa and chocolate industries on the island. Our objective is to awaken a deep pride and love for cocoa and chocolate among Grenadians of all generations and to share the cacao love with the world. 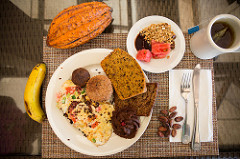 Add local chocolate to your diet. Be inspired by our chocolate chefs and add some chocolate flavors to your meals. 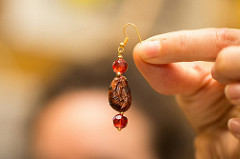 Grenada Chocolate Fest has been a catalyst for the ever blossoming chocolatiers and cocoa industries.

Give us a call to find out more information about Grenada Chocolate Festival.

Take a look at our 2022 chocolate festival. There’s something for everyone to enjoy.

We're not around right now. But you can send us an email and we'll get back to you, asap.